“Strange as it may seem, I still hope for the best, even though the best, like an interesting piece of mail, so rarely arrives, and even when it does it can be lost so easily.”
–Lemony Snicket

So not long ago, I was watching a video by the insanely talented Kristen Martin. [Her Twitter] [Her YouTube] In this video, Kristen did an unboxing of a new monthly subscription box (aren’t those things so much fun?!) called the Minx Lit Box.

[Minx Lit] Allow me to preface this by saying I was not contacted by Minx Lit to do this post, nor was I given the box for free or at a discounted rate. My husband purchased the box as a surprise for me, at the full-price. These opinions are my own. (Thanks, husband!)

I received an email several days ago telling me that my Minx Lit box had been shipped, and was provided with a tracking number—which I checked almost obsessively.

Ya’ll when I tell you that last week was rough, understand that rough is an understatement. From Monday morning, all the way to Friday when I was so stupidly busy that I didn’t even have time for a cup of coffee. When I got home Friday, I parked in front of my apartment and stared at my front door. My poor, caffeine-deprived limbs barely had the gumption to get out of the car. Then I remembered my Minx Lit box should have arrived! That was all the motivation needed to walk all the way to the apartment office, where I was sure it had been delivered.

Our apartment office people are great and as soon as she saw me walk through the door I was greeted by name (amazing, seeing as how there are hundreds of residents here) and she hopped right up and got my package for me. The first thing I noticed was its heft.

I scurried home and tended to my dogs, leaving the Minx Lit box to flirt with me from its perch on my dining table. Once my canines had calmed down (because they’re always certain their mama is never coming home, so it’s a celebration when she does) I sat in front of the box and smiled. It was so nice to have such a luxurious treat on a Friday after such a long, arduous week! I ripped away at the wrappings and was greeted by this: 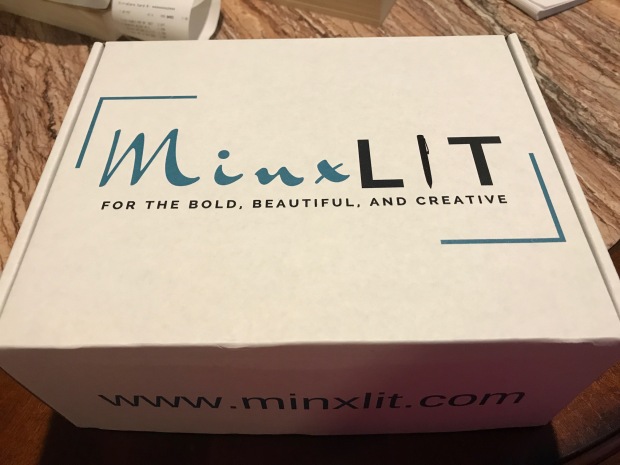 For a new business, I was very impressed with the professionalism of the box itself. For some reason, I didn’t expect branded boxes.

The second thing I noticed—which was even more unexpected—was for the box to smell so damn good! But once I opened it, I leaned into it and inhaled an extremely pleasant aroma.

Instead of ripping away at the carefully wrapped items to investigate where the scent was coming from, however, I took a moment to appreciate that each item was lovingly wrapped. I also found myself amazed by the quality of the literature included in the box.

The longer the lid was open, the stronger the fragrance became. I couldn’t place my finger on what it was, but I enjoyed the guessing game. 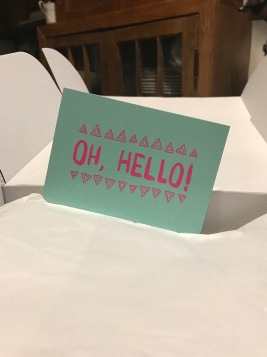 I moved stuff around in the box, just browsing, when I realized there was a card, and as my mama taught me, you always start with the card before diving in for the goodies. So, I followed my mother’s orders.

It was adorable! I love pink and teal.

It blew me away when I realized it was personalized! (Covered up the name, because the husband bought this for me as a gift, and he used my real name.)

After I read the card, my conscience was cleared to delight in the rest of the treasures. First thing I wanted to know was what had filled my apartment with such a decadent aroma. Turns out, it was a candle!

And not just a candle, but a massage oil candle in a succulent watermelon scent. (Bottom right-hand picture.)

After I stopped sniffing the candle, I discovered a mug—and anyone who knows me, knows I love mugs!

Further inspection revealed even more smell-good treats with bath dust, and some wildly aromatic teas, which I couldn’t wait to brew. I smiled when I saw the beautiful bookmark with one of my favorite quotes (top left picture) There were just so many neat little things in this box, each one stripping away my stress and anxiety from the week, and replacing it with giddiness.

Unless I misread, each box is promised to contain a journal—and this one is adorable and just the right size and weight for me to carry in my purse. As writers, we can never have too many notebooks to jot down those elusive golden ideas for our next best-seller.

While I read mostly fiction, I am stoked at the book that was included in the inaugural box. I’ve heard good things about it, and it already has a place on my nightstand!

Also included was a booklet (as seen in the freshly-opened box) that contained extras and coupon codes: one for two free sessions of life-coaching, another for a discount on book cover design. It also provides writing prompts and blogging topics…which is something you all know I suffer with from time to time—so I will definitely utilize those!

My birthday is coming up (Friday!) so I may have to go ahead and pre-order the next box as a gift to myself. I imagine as this subscription gains momentum that they may have to drop the handwritten cards, but I am intrigued to see what else they include.

I had so much fun with Minx Lit, that I’ve decided to have even more fun with my mail carrier and find other bookish, writerly things I can order and therefore share with you.

Until next time, my lovelies! Happy writing!