I’ve been pretty freaking quiet on social media as of late, but I swear it’s for a very good reason. Alabama Rain is so close to being ready. SO. FREAKING. CLOSE.

The good news is that those who have read advanced copies have had some amazing things to say. For instance: 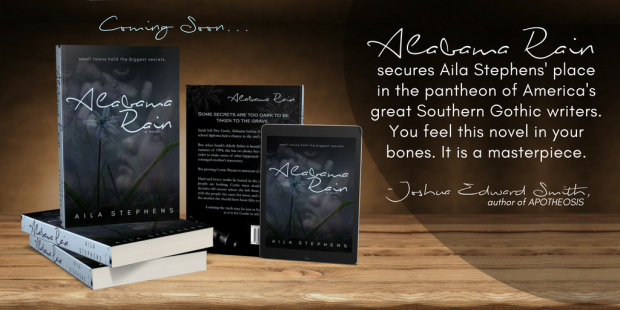 When Joshua sent me that blurb, I will not lie… I cried. Please check him out on Twitter.

And just this morning I woke up to a beautiful message from a sweet reader, Amy Thomas, please check her out as well. Amy said the book was: incredible… beautiful… heartbreaking… stormy… lovely.

I’ve received messages from a few people telling me they couldn’t bring themselves to go to sleep, staying up well-past midnight (on work nights!) to keep going.

The response thus far… it’s blown me away.

So, that’s what I’ve been doing. Perfecting this book because it means so much to me and it’s hitting a chord with readers in ways I didn’t necessarily imagine when I first started on this story two years ago.

It’s changed a lot from what I first envisioned. But that’s a good thing. It evolved as I did.

But some of its evolution came only after receiving the physical proof. I’m not changing the story after the proof, no, but let’s talk about that cover up there. I’m super proud of it. Yes, I design my covers all by myself, so it isn’t perfect—but I try to get them damn-near close. But the cover in that image, which was the cover I submitted, came back to me a scant darker than I would like.

The book isn’t perky and they just seemed…off.

Also, it’s hard to tell in that photograph, but the spine has a rain element to it, which does show up better on the physical copy—but I decided to make it a wee bit darker.

But, this is what proof copies are for. To find the mistakes before your readers do.

I decided to do something really, what I consider, bold with my chapter headers—because I design those too. And I am super excited they turned out nicely…but I’ve decided to go even bolder. Truth be told, I’m stupidly happy with how the interior turned out, and I think the minor tweaks I’ve made will just send it over the top.

There will be hardback copies of Alabama Rain available as well. Designing jacket flaps has been a very different ballgame for me. I admit, that process isn’t quite finished yet.

The last change I am considering is the way I categorize this book. It is still, at its heart, a Women’s Fiction story—that will not change. But, I’ve been sub-categorizing it as Historical Fiction… which is quite broad. It really does fit in with the Southern Gothic sub-cat because it’s a very specific kind of historical fiction. Sometimes Southern Gothic is also called Southern Noir, or Grit Lit. I think the pairing of Women’s Fiction and Southern Gothic gives the book an appeal I hadn’t anticipated which will allow it to be enjoyed by men who wouldn’t otherwise read Women’s Fiction.

Let’s get a colorful definition of the genre for you:

There are no supernatural elements to Alabama Rain, but the rest fits rather nicely.

I had said previously that I wouldn’t hold any giveaways for this book—but after seeing just how lovely it is from cover-to-cover, I think I will hold one rather soon. So, keep an eye out.

In the mean time, I am still giving away some eARCs. I’m going wide with this novel, so whether you like to read on Kindle (Kindle copies coming soon) or iBooks or Nook, (copies available and ready) if you would like a free advanced e-copy (in exchange for an honest review, of course) of this book let me know. (My goodness is it pretty in iBooks and Nook)

That’s all for today. There are files to upload, jacket flaps to obsess over, coffees to drink, bagels to eat, work to do, puppies to pet.